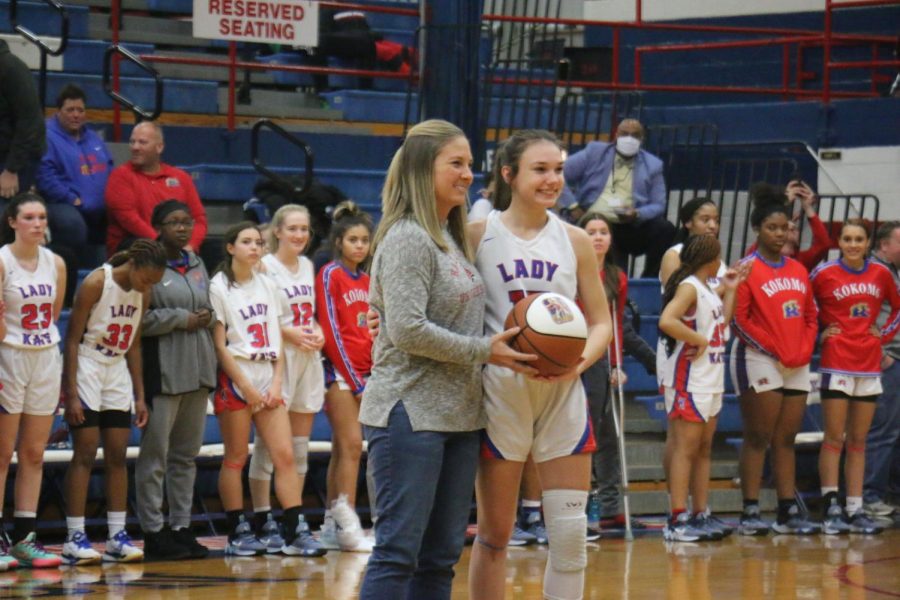 Senior Chloe McClain receives a basketball for becoming a member of the LadyKats' 1,000 points club. McClain was presented with the ball from the last member of the club, KHS graduate Audrey McDonald-Spencer.

Senior Chloe McClain is no stranger to the basketball court. She was first introduced to the sport when she was in the third grade and started attending the LadyKats’ camp. But it wasn’t until her sixth grade year that she became more interested in basketball.

Then-head coach Jeremy Dexter took McClain under his wing and showed her the way of basketball. Understanding this history behind basketball helped her to find a love for the sport and further drove her to joining the Kokomo girls’ basketball team. This season, McCain scored her 1,000th point, joining an elite group of LadyKat players. She is the eighth leading scorer in LadyKats’ history with 1,123 points.

Chloe was beyond proud to have met her goal. Not only did she feel great about her accomplishment but she also felt so much love and support from her teammates.

“My success at KHS has really been through the support system I have had around me. My teammates are my number one supporters and never fail to give me a little confidence boost every now and then,” McClain said. “The support I have had not only at the high school but as well as in the community has really helped me to be able to enjoy playing basketball. I have spent countless hours in the gym with our girls’ team as well as the boys’ team and many individual coaches that have led me to become successful.”

As McClain’s high school career comes to an end, she will continue her basketball career at Indiana Tech in Fort Wayne.