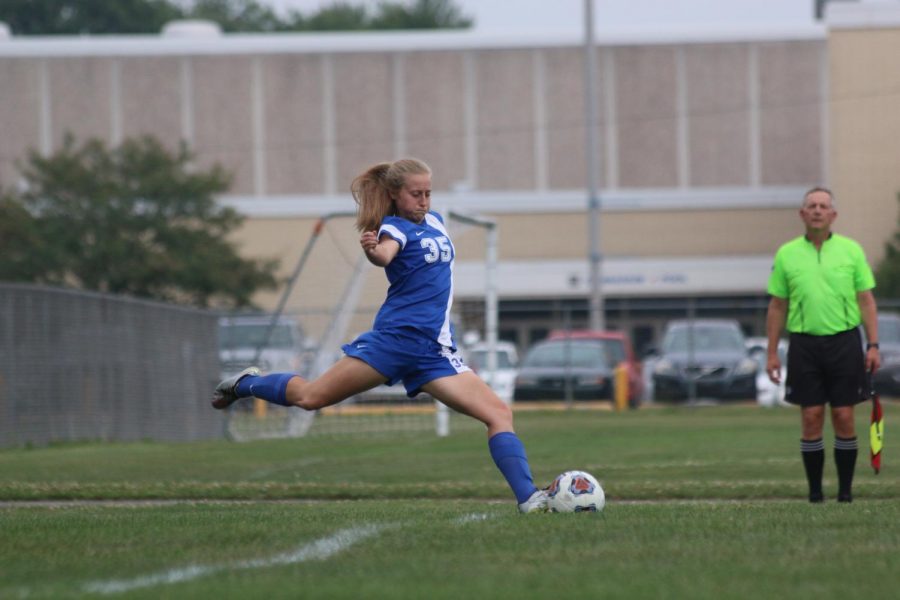 Kokomo girls’ soccer is back at it again this season with a ratio of 6 wins:10 losses.  After saying farewell to many strong players from the class of 2020, new and returning players have started to fill their cleats.

“Goals are always a work in progress, and something to be worked towards. We are always changing and reassessing our goals, but always improving,” said head coach Kevin Duggins.

Changes to formations were made in order to adapt to the current team’s abilities.  For example, a sweeper might be moved up to a stopper position or a forward.  However, formation changes weren’t the only thing different about this season.

Covid-19 had a significant impact on this year’s season.  Masks were required to be worn on the bench during practice and games.  Players can’t high five the opposing team after games.  Game schedules fluctuated due to other teams having to pull out after having to go into quarantine.  Luckily, there have been no cases in the Kokomo girls’ soccer team.

The season started out pretty rough around the edges. Senior Colleen Weaver said, “We definitely had a hard time working together during the games to do what we learned during practice and it showed.”

This is to be expected at the beginning of a season dealing with incoming freshmen and other new players. Weaver went on to explain that there have been significant improvements since the beginning of the season. The girls’ game against the Richmond Red Devils started out shaky and the girls struggled to work together. However, in the second half the team pulled together and won the game.

Rebecca Stillwell pointed out another positive aspect of this year’s season. Instead of Arnie’s Pizza, the girls finally convinced Coach Duggins to get Chick-fil-A. On a more serious note, the general consensus of the team was that there has been great improvement in both attitude and skill.  This year the girls’ soccer team moved from 9th to 5th place in the North Central Conference.

Seniors Colleen Weaver and Makaila Carpenter will miss the coaches, sense of competition, and friendships that came with playing soccer at Kokomo High School.  With several talented players graduating, more girls will be needed to step up and become members of the Lady Kats soccer team next year.  Stillwell believes that the team has exhibited a lot of potential to play even better in 2021. The team reached many goals this season and plans to reach even more next year in order to grow together.