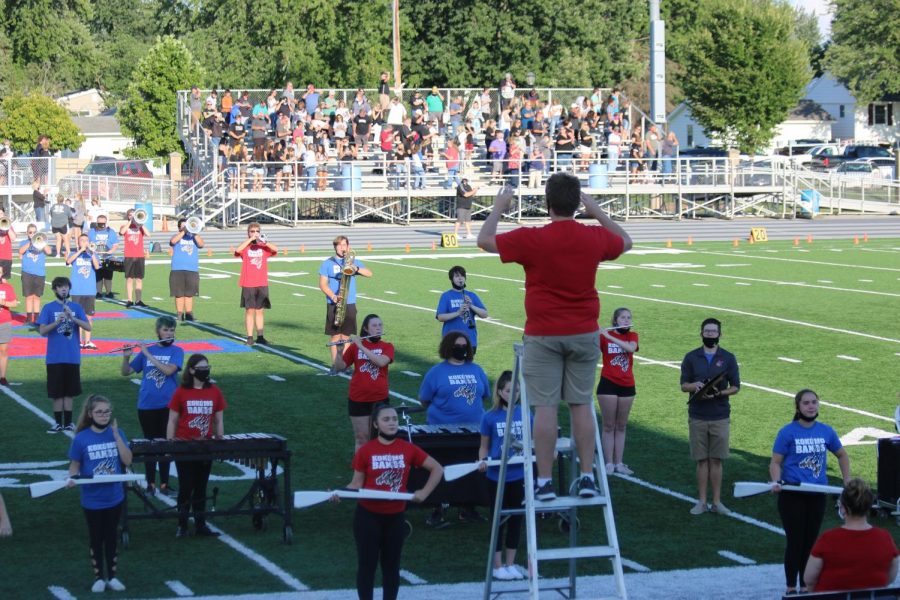 The Wildkat marching band performs before a home football game. Their season was cut short due to the Covid-19 restrictions.

Marching band is jamming this year to a new groove. Covid-19 changes have caused the marching band to make some changes, much like most other things this school year. Practices this year had to be broken up into different time frames. For example, brass and woodwinds hold their practices at separate times. The students are required to socially distance at least six feet apart and competitions will not occur this marching season.They also must wear a mask any time they are not playing.

“We have had to drastically change the Marching Band.  During the summer we were required to play in as small of sections as possible to limit student contact,” said director Brandon Anderson. “Now we are rehearsing in full groups again, but must keep at 6 ft. intervals at all times. This isn’t too much of a challenge while we play, but it is very difficult when they are just hanging out between exercises.”
So far this year, the marching band has only performed before football games. They also filmed their “show” and posted it on the marching band social media pages. But, they are looking forward to a new marching experience later this year. The marching band and color guard will perform in downtown Kokomo at a Christmas parade on Dec. 5.
They do have some concerns as the season continues.
“I fear that less people will want to join because it’s not the same,” said Franceska Walker , who plays the mellophone, french horn and trumpet.
But, Anderson does have a plan to continue practicing should the school need to move back to e-learning.
“We are prepared with multiple backup plans in the event that we return to eLearning or can’t have after school practices. I am prepared to load our band trailers and deliver instruments to students’ houses so we can continue rehearsing virtually,” he said. “However, our primary plan is to listen to the experts and take the virus seriously so we can keep our students safe.”
Head to downtown Kokomo on Dec. 5 to see the Wildkat marching band and color guard help kick off the holiday season.