Swimmers get ready for tournament 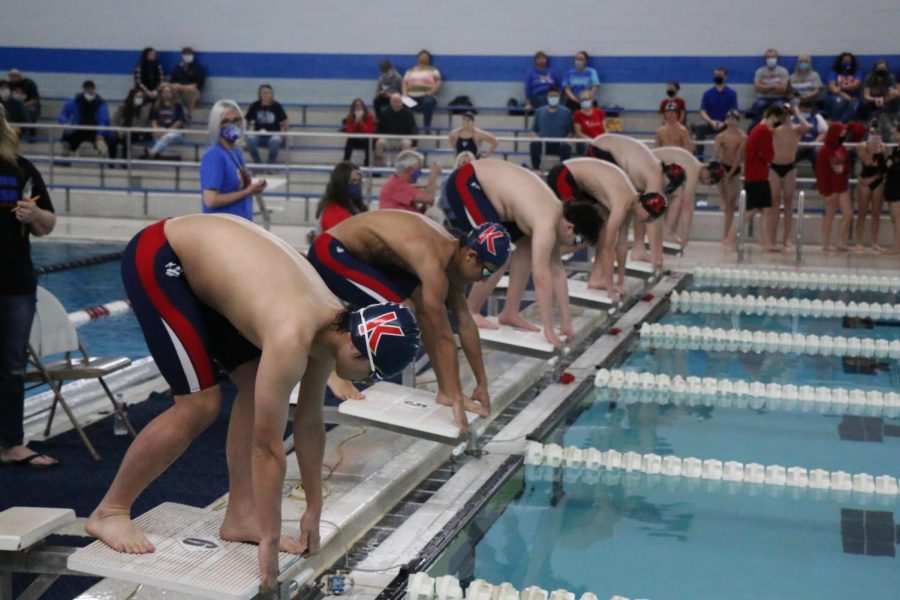 This year, the KHS boys’ and girls’ swimming and diving teams have been faced with many challenges. Because of the Covid-19 pandemic, the teams have had to make adjustments to their practices and meets.

“Masks have been required on deck at all times until the swimmers enter water. In addition we have been making sure the swimmers swim in the same lane each day so they are only around the same four or five people every day,” head coach Trevor Trimpe said.

The swim meets are also significantly different this year. Normally, the teams alternate lanes so each swimmer is swimming next to the opposing team, however, this year they are swimming in three consecutive lanes and the opposing team is in the other three. This makes it harder to tell where the opponent is in the race and the swimmers are racing their teammates instead of the other team. Also, swimmers have to exit the pool and go back to their team before the next heat is called up. At the recent North Central Conference meet the boys’ and girls’ events were split into two different meets to keep contact at a minimum.

Another change the teams have faced is a new head coach. Trimpe has been coaching full time since the fall of 2013. From 2013-2018, he was coaching at the collegiate level. He was an assistant coach in Vermont for four seasons and a head coach at a college in West Virginia for one season. From 2018 through the spring of 2020, he was a club coach in Minnesota coaching 12-18 year olds.

Trimpe is pleased with the work his team has put in this season. He credits much of the progress to resiliency of the athletes.

“Swimmers are  a resilient and mentally tough group of athletes. Having been around the sport since I was seven I know how hard it is to train and stare at the black line every practice. The amount of discipline and mental fortitude it takes to be a competitive swimmer is unmatched in most other sports. Swimmers tend to do very well later in life because they already have the experience and  framework in place to work through adversity,” Trimpe said.

The boys’ swimming and diving team earned a sixth place finish at the NCC meet. Junior Isaac Elkin won the diving event, defending his title from last year. Senior Logan Pitner swam to runner-up finishes in both the 50 freestyle and the 100 freestyle. The boys’ team will compete at the IHSAA sectional meet on Feb. 18.

The Lady Katfish placed second at the NCC meet. They were led by Macee Reckard, Jenaka Hawkins, Paige Wilson and Emily Lucas who placed first in the 200 medley relay. Reckard also won the 100 freestyle event, while Hawkins finished first in the 100 breaststroke. The team competes at the sectional on Feb. 4.